Our daughter, Aubree, was born on the 16th December at 9.12am. After approximately 14 hours in labour my waters broke which showed thick meconium, my partner (Tom) called for the midwife and before I knew it I was being wheeled down to the labour ward. The CTG was put round me and we were asked ‘who’s cutting the babies cord?’ ‘do you have an outfit ready?’ as far as I was aware everything was OK and I was going to have a “normal” delivery. That all changed very quickly… The CTG showed an abnormal heartbeat. The emergency buzzer was pressed. The room filled with consultants and before I knew it I was being rushed down the theatre for a CAT 1 emergency caesarean.

I was given a spinal block and then surgery began. Within seconds my daughter had been born pale and floppy – it was completely silent in the room. I remember looking up at Tom and asking him ‘why isn’t she crying?’ I could tell by the look on his face something wasn’t quite right. After what felt like a lifetime we heard her cough. We were both so relived. I was pretty out of it at this point but all I remember is her being whizzed past me on a trolley.

After surgery I was put into a side room. Tom and both our mum’s were there. I was completely oblivious at to what was going on, Aubree had been taken to the SCBU (Special Care Baby Unit) where she was on mechanical ventilation, morphine and had other wires hanging out of her. As I had a caesarean I wasn’t able to get up to go and see her so a consultant came in to discuss what had happened and what would happen next. She explained that Aubree had been born lacking oxygen to the brain and that there was a chance that she could have severe brain damage. I remember feeling numb – it didn’t feel like it was really happening. Within 3 hours Aubree was transferred over to an intensive care unit at the John Radcliffe for brain cooling, a procedure where the body is cooled to around 33 degrees (this basically stops and further damage to the brain).

So off my 3 hour old baby went in an ambulance to Oxford and I was left in Wexham (Slough) with no bump and no baby. I had only seen pictures of her (other than seeing her in the incubator briefly), I hadn’t been able to kiss her, cuddle her, hold her, feed her or do all the things I should be doing as a Mum. 24 hours later and I was discharged from Wexham and off to Oxford to see my little girl properly for the first time. Tom had been with her since she was transferred so he had been keeping me updated with her progress.

When I finally arrived I was scared to touch her, she was covered in wires and tubes – I literally just sat there and stared at her. Later that evening everyone left (I was lucky enough to be given a room to stay in) I was sat by her bed feeling so isolated. I know I wasn’t the only person in the world experiencing this but I felt like I was. After a few hours of being sat alone with her a nurse came over to change her nappy – I wasn’t allowed to do it just encase I pulled an important wire out by accident. I hated seeing someone else change her nappy, I thought to myself ‘it should be me changing her. I’m her Mum’. The nurse explained that I was OK to hold her hand/put my hand on her chest. I was SO excited, I gave her my finger and she held onto it so tight.

As the days went on I felt more comfortable touching her, I even gave her some kisses: 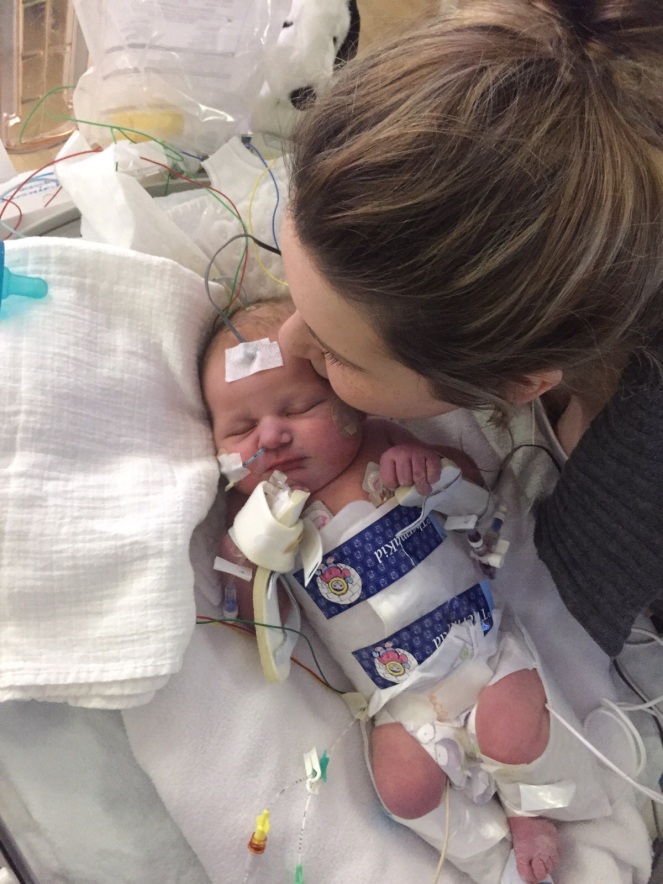 After the most draining 5 days of my life she was finally able to come off the machines, we could have our first cuddles with her and we were able to go home where we could start enjoying life together as a family – wahoo. We knew we weren’t out off the woods yet, although we had so much positive feedback about Aubree’s progress we would not know for sure how the lack of oxygen had affected her until she had a MRI scan.

She went for her MRI on the 5th January 2016, after a week of waiting for the results we were given the amazing news that there was no damage to her brain at all. She was also assessed at 3 months old (1 month ago) – she is meeting all her milestones and they don’t seem to have any concerns. Although cerebral palsy cannot be ruled out until she is 18 months old I am confident that she won’t have it and even if she does I wouldn’t care. The most important thing to me is that she is alive!